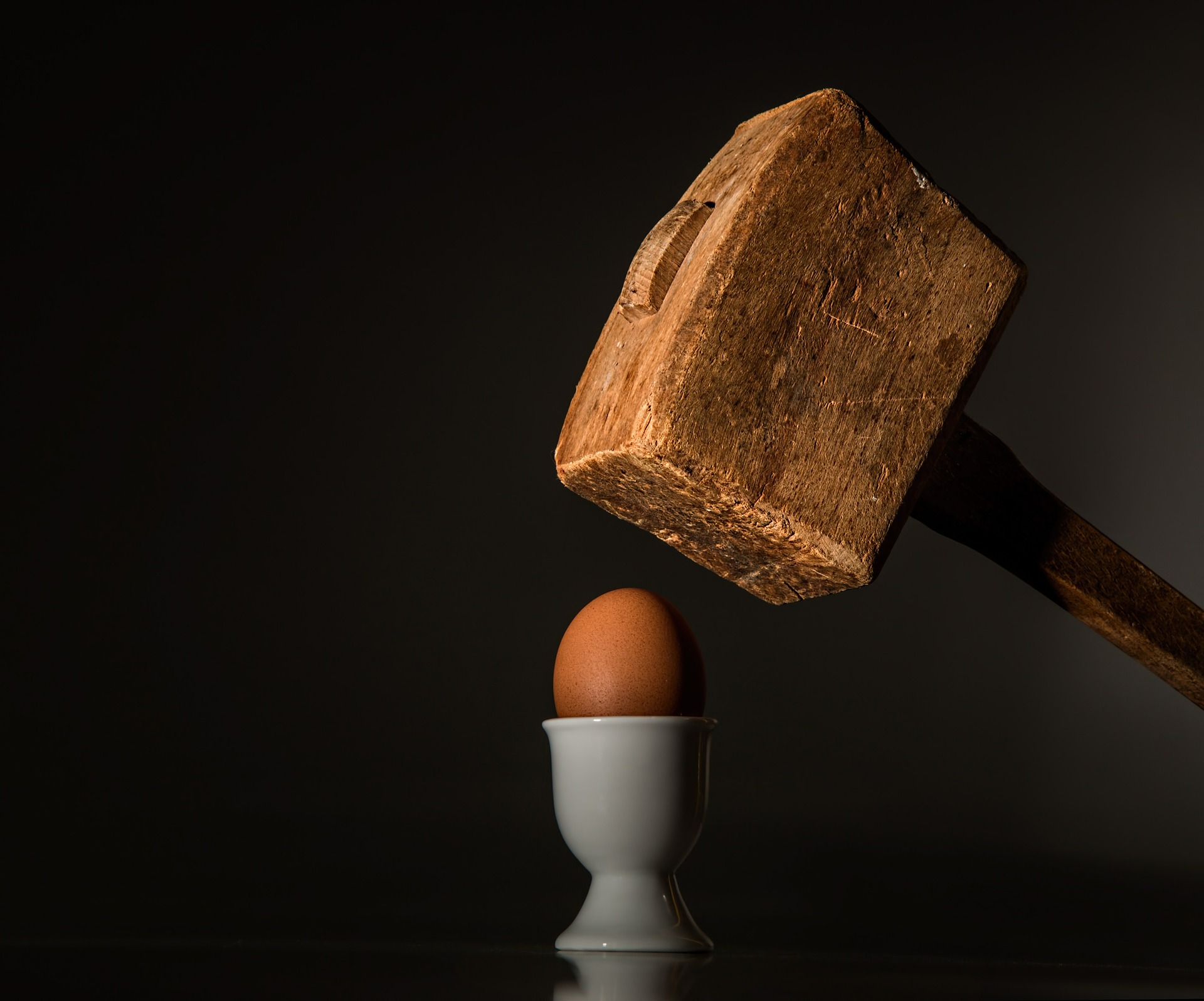 To accomplish these big goals, it is not sufficient to bring together a group of people and wait for magic to happen. Instead, the actions of these people need to be aligned and coordinated with each other in order to create an outcome that is larger than the sum of the parts. Although alignment is a polite word, it inherently means that individuals will have to subject themselves to the will of the group, or more specifically, to the leaders emerging within the group. It implies a reduction of autonomy and freedom.

Over the millennia, humans have used a variety of mechanisms to align themselves. The earliest tribes defined clear expectations on each individual and would expel those that did not comply. And in those days, being alone was an almost certain death sentence. Later on, slavery was used as a mechanism to align the actions of many people. Even if it is unclear whether the pyramids were built by slaves, there are many examples of slaves accomplishing great things. And even if slavery has been abolished in most of the western world for centuries, in many agrarian communities, workers were virtually enslaved by the farming landowner as they either had to work for him or starve.

Although the aforementioned alignment mechanisms are based on one human controlling another, there are more subtle mechanisms employed as well. Organized religion has been used as an incredibly powerful tool to steer the actions of people. And of course, totalitarian regimes use their “religion” as a mechanism to control the population.

In these modern times, at least here in the west, we are expected to, in a certain way, enslave ourselves, and live in accordance with our own rational decisions and ambitions, rather than being driven by our instincts, emotions and habits. Although we may feel that these are our choices, of course we are driven to a large extent by our upbringing and the culture of the society we live in.

The reason to explore this topic is because I spend a lot of time thinking about organizations and about the challenge of organizing groups of people. During the last 100+ years, the answer has been hierarchical organizations. And make no mistake: hierarchies work! According to Jordan Peterson, lobsters organize themselves in hierarchies and use the same hormonal system as humans, such as serotonin, to steer behaviour in hierarchies. Humans and lobsters separated something like 300 million years ago. There were not even trees on the earth at that time apparently. So, saying that hierarchies are inherent in our nature is entirely correct.

The problem with hierarchical organizations is that hierarchies are static and that power is driven by position rather than competence. So, rather than creating hierarchies that are meritocratic and temporary in nature, we are stuck with permanent fixtures that maybe were good for the business that we once were in, but most certainly no longer suitable for today’s reality. Especially in European companies, many of the senior managers are enlightened in that they understand that going against the desires and expectations of their staff tends to result in a severely shortened career. The end result is, of course, an even more static structure as the underlings are unable to change because of lack of power and managers are unable to change because of their organization resisting.

On a weekly basis, I experience exactly this problem and I see people waste up to 90% of their working hours to just manage the internal organization as they’re trying to accomplish outcomes that are desirable for the organization as a whole. That everyone even says they want! I think it is hard to underestimate the fantastic amounts of waste in large, hierarchical organizations. As an example: in an embedded systems company that I visited earlier in the year, a software development organization in that company employed around 700 people of which less than 70 actually had a compiler installed on their computer. This means that more than 90% of people were doing other things than building software!

The answer to this challenge that several startups, consultancy companies and even larger companies are exploring is, of course, autonomy and empowerment. If it is the boss of people that is holding them back from doing the right things, then let’s get rid of the boss. Then everyone can take the decisions they feel they need to make and act on these. Although I am very much in favor of providing people with more, rather than less, freedom in a part of their life where many spend most of their waking hours, the point missed by many is that the basic problem does not go away: we STILL need to align the work of everyone if we’re hoping to accomplish the outcomes that can only be achieved by groups of people.

When studying organizations that pride themselves on being empowered and non-hierarchical, it quickly becomes clear that alignment still takes place, but in different ways. The least intrusive way is through architecture. Teams are assigned to a specific part of the architecture and are empowered to operate within their part of the system as they see fit. The second model, often combined with the first one, is through data. Teams receive quantitative targets to achieve within their part of the system, such as a specific increase in conversion on an eCommerce website, and are at liberty to decide how they aim to achieve these targets. In this case, all the alignment takes place inside the team.

In situations where it is necessary for multiple teams, or even the entire organization, to align we end up in other mechanisms. Of course, there is the coordinator – the person appointed to coordinate a certain topic across the organization. Depending on this person being a police agent or a coach, this tends to reduce the empowerment of teams somewhat or significantly. In fact, in some of the companies that I work with, some teams have to contend with up to 10 “coordinators” that often have conflicting requirements. Examples include security, safety, export restrictions, legal constraints, region representatives, customer advocates, corporate social responsibility folks, environmental regulation experts, etc. If not managed carefully, teams become the victims of these different coordinators, are not empowered at all and productivity is reduced to a crawl.

The second mechanism is the use of communities. Here, every team or unit has a representative in a community that is targeted to address one dimension of alignment that needs to be accomplished inside the organization. Although many think of communities as empowering, this is in fact not the case. The main difference is that instead of a manager deciding, it is now the community that decides. Individuals and teams are still expected to follow whatever decision was taken in the community.

The third mechanism, especially in startups, is the use of a strong culture to align people around. The culture basically expresses a set of beliefs and behaviors that capture “what we do around here and how we do it”. A strong culture is incredibly powerful, but the challenge is similar to hierarchies: changing the culture is incredibly difficult (in fact, harder than changing hierarchies) and especially for long-lived companies, evolving the culture to stay competitive is a necessity.

Fourth, there are organizations that embody a mission that is considered by their employees as well as society at large as meaningful and relevant. Of course, many social entrepreneurs use this mechanism to build their company around, often using a triple bottom line of social, environmental and financial factors. However, also for-profit companies can use this strategy assuming they are sincere about it. For instance, Tesla making its patent portfolio available to other companies looking to build electric cars is a good example of a company delivering on its mission to rid the world of cars propelled by fossil fuels.

My goal with this article is to outline the various mechanisms that exist for aligning people in large groups. There is a need for alignment, but whenever mechanisms for alignment are put in operation, the autonomy of individuals and of teams will be constrained. The high degree of interest in empowered organizations is driven by the experience of many that traditional alignment mechanisms easily degenerate into a form of coercion. Coercion damages the integrity of individuals and the result is an organization where its members are not engaged (see earlier article), only do what they’re told and show up only for the paycheck.

In my experience, mission-driven organizations tend to have the easiest time aligning the actions of their members and require the least amount of force to accomplish alignment. These organizations tend to spend some or significant resources on translating the, often qualitative, mission into concrete structures and quantitative goals. Although this is a form of alignment, it allows for a broad engagement of everyone in the organization which limits the negative impact of imposed alignment.

Concluding, when working with your organization as a leader, there are three main take-aways. First, ensure that your organization has a clear and powerful mission that you and everyone in the organization is willing to put their lives in service to. This is critical to express and, even more important, to act in accordance to. We all know the value statements of traditional companies that are all too frequent a farce. Second, whenever possible, rely on meritocratic, temporary hierarchies instead of permanent structures. This allows for a much simpler approach to changing the organization in response to changes in the market. Organizational changes should be small and continuous rather than episodic and large. Third, for every point where you believe alignment is required, carefully examine whether the benefits of autonomy for individuals and teams possibly outweigh the benefits of alignment. In many cases, allowing for divergence increases engagement as people feel in control and also allows for experimentation with alternative ways of doing things that the organization as a whole might learn and benefit from. The aforementioned continuous evolution of the company is more easily achieved if more diversity within the organization is facilitated.

Alignment is a necessity whenever two or more people are expected to collaborate to achieve a shared goal, but it needs to be wielded carefully and with restraint if one seeks full engagement from everyone in the organization. The notion of the company as a carefully tuned machine is really outdated as all the work that can be “tuned” is repetitive and should have been automated if it is still conducted by humans. The remaining humans in the organization are then by definition focused on innovation and change and consequently need to be empowered and autonomous to deliver on their and the organization’s potential. So, empower these people already and focus less on outdated notions of efficiency!