During a conference in Vienna, I listened to a keynote from a researcher from a large industrial company. The talk was full of the promise of IoT, connectivity, cloud, edge computing and apps and the business benefits that could be realized. The presenter did a good job, but I have heard these presentations on the fabulous new world of Internet of Thing (IoT) many times before as well as read perhaps hundreds of articles.

The challenge is that everyone is working on the easy part: sensors, connectivity, places to store data, security, etc. It’s all about technology enablers and platforms, but everyone seems to ignore the elephant in the room: every company, large or small, has solutions to provide vertical integrations where their devices, their edge computing solutions and their cloud solutions. And for all kinds of reasons, they provide little if any opportunities for others to connect to their devices, either for collecting data or for control. There is no viable and convincing approach that allows for the first steps of horizontalization of the IoT market. 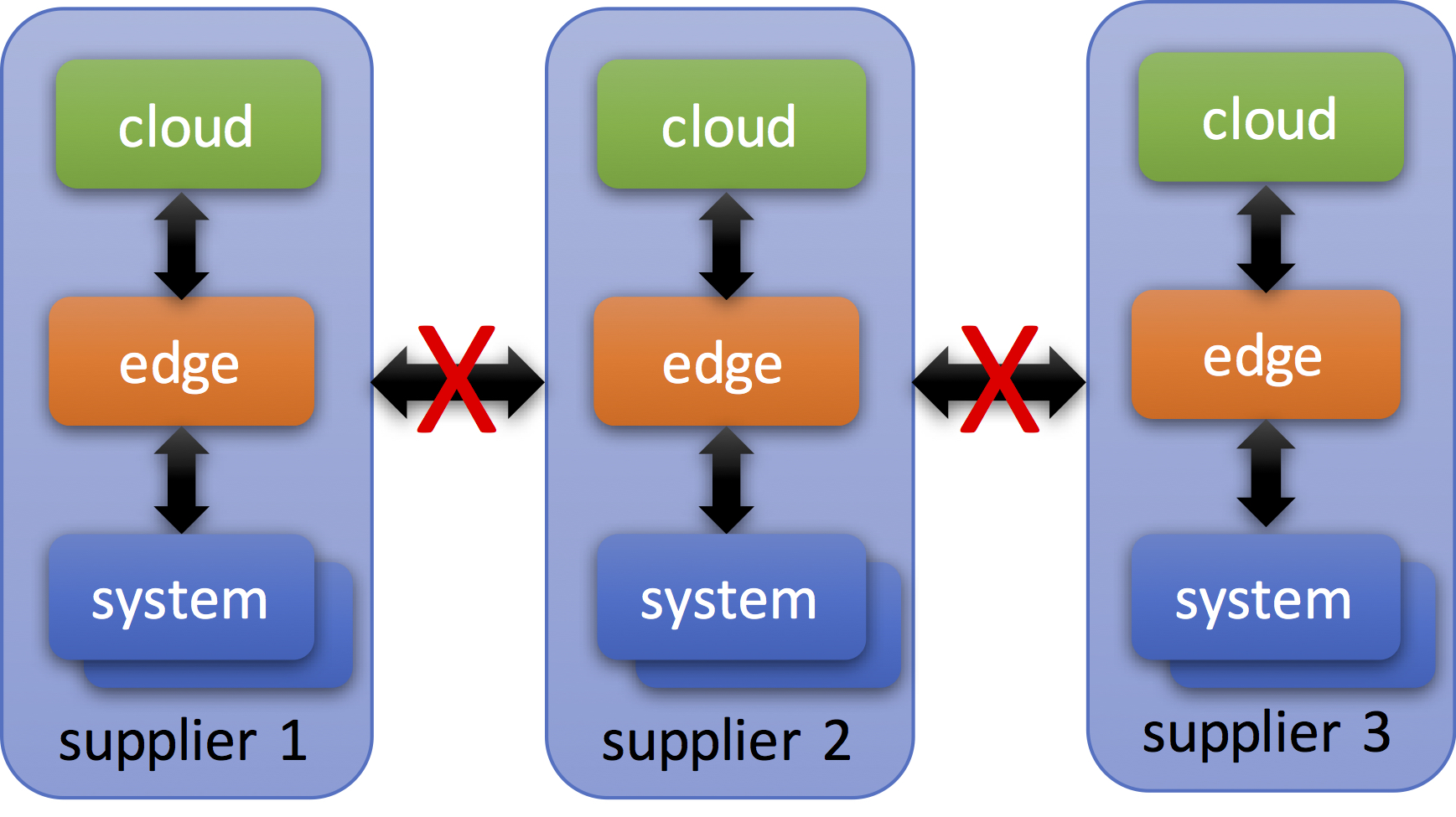 One of the companies that I work with described the challenge as outlined in the figure above. Each supplier provides a vertical solution consisting of the systems, edge computing solutions and cloud solution but goes out of their way to avoid cross connections to other vertical solutions. Similarly, I was involved in a research project with a home security company and an energy provider. Both installed sensors and actuators in the homes of customers and neither was willing to explore the potential for accessing and controlling each other’s devices.

In many ways, the IoT industry today is similar to the computer industry in the 1970s (see the image from Andy Grove below): vertically integrated businesses that provide their own stack, from top to bottom, and that force customers to buy bait, hook and sinker into the vision provided by the company offering the stack. Once you choose a certain ecosystem, you’re locked in and changing to another ecosystem will prove to be an expensive endeavor.

The difference is that in the 1970s, the business benefits of automating administrative processes were obvious and the companies were less aware of the lock-in problem. In modern days, many companies that I work with are wary to become overly dependent on a single supplier as they have paid a huge price for that mistake multiple times in the past. And, as I outlined in last weeks post, also these large suppliers realize the risk that they expose themselves to if they just work as product providers. So, some companies worry about their suppliers forward integrating into the value network and replacing them altogether. 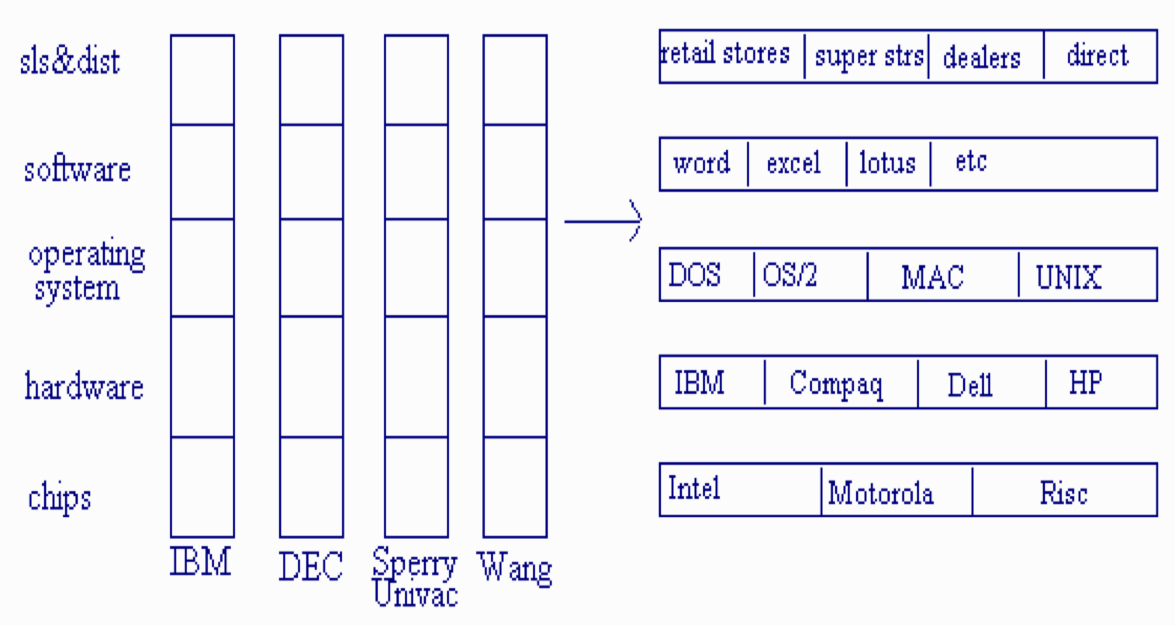 That does not mean that there is no value being created in the IoT space. Vertical integrations allow for all kinds of benefits related to preventive maintenance, more close-loop optimization and increased agility. However, it is obvious that the true potential of IoT will not be delivered until we find an effective way to horizontalize the IoT domain, similar to the transformation of the computer industry. However, for the current industry players to go through that transition, there needs to be a fundamental disruption of business models and industry structures that the incumbents will be loathe to undertake. And as IoT typically addresses industries with high barriers to entry, because of regulation, security, safety and customer brand creation concerns, this transformation may become a slow and dragged out affair.

Now, I will not claim that I have the solution, beyond identifying the need for the IoT space to horizontalize. However, I do believe that blockchain technologies, allowing for fully distributed establishment of trust without reliance on a central trusted authority, will be a central component. In a recent paper, we discussed the different alternative blockchain architectures and their relative benefits. The reason is that none of the large and small incumbents will want to give up autonomy and place themselves under the control of one of their competitors. Blockchain style technologies allow ways to control secure access, safety related concerns and other aspects of interoperability across vertical IoT stacks without a single, central trusted party.

Second, the end-customers (B2C and B2B) need to push much harder for secure interoperability. Unless the suppliers are forced to open up, they have little business incentive to do so. In industries such as telecommunications, the operators partner up to dictate industry terms to their suppliers. Although other industries such as manufacturing, automotive and logistics, may not have the same structures in place, these industries will have to create solutions to accomplish the same outcome.

Concluding, IoT is delivering on some of its potential but major societal and industrial benefits are left unrealized as we are unable to break through the boundaries put up by the aforementioned vertical stacks. This really needs to be addressed by the end-customers in the various industries potentially benefiting from IoT. Preferably this happens soon as a fully connected IoT world is a better one than the one we live in today and we owe it to humanity to get us there sooner rather than later.